Alexander del Mar (1836-1926) was an American political economist, historian, numismatist and author. He was the first director of the Bureau of Statistics at the U.S. Treasury Department from 1866-69.
Del Mar was a rigorous historian who made important contributions to the history of money. During the mid-1890s, he was distinctly hostile to a central monetary role for gold as a commodity money, championing the cause of silver and its re-monetization as a prerogative of the state.
He believed strongly in the legal function of money. Del Mar dedicated much of his free time to original research in the great libraries and coin collections of Europe on the history of monetary systems and finance. 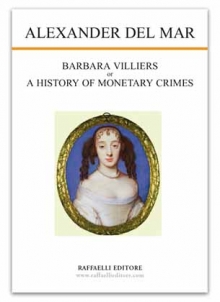 BARBARA VILLIERS or A HISTORY OF MONETARY CRIMES